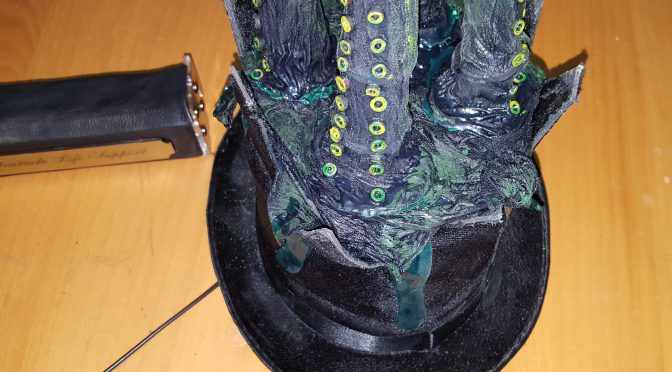 The makings of a Steampunk Tentacle hat 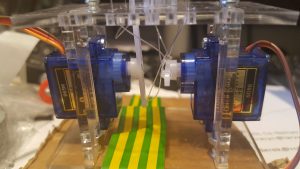 The base of the tentacles are powered with a pair of servos. Each servo is connected to two pieces of nylon fishing twine. Each servo controls a degree of freedom, so one does X and the other Y 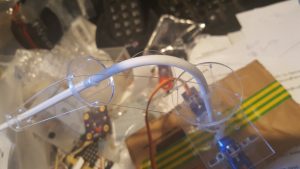 The centre of the tentacle  is the spring from a net curtain. This gives the center rigidity whilst allowing the tentacle to move in any direction.

The fishing twine is threaded through a set of acrylic rings and tied off at the top. Puling on one of the nylon twines from the bottom caused the tentacle to bend in that direction.

The Tenticle and servos are controlled (as a test) from a raspberry pi using the two PWM channels to control each servo. 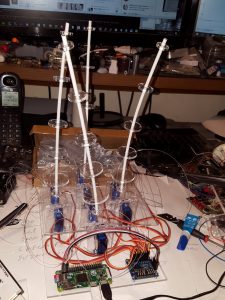 Once the single tentacle was proved I built a set of four. 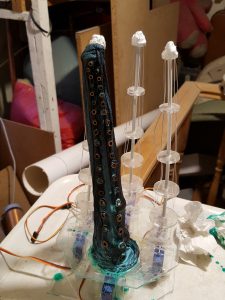 After a number of attempts, I found that the best covering for the tentacles,that would give the desired flexibility, was stockings. The top ends of the tentacle was coated with silicon sealant to give a more rounded end to the tentacle. Here is one covered with a back stocking. The

stockings were then covered with a couple of layers of liquid latex togive a shiny look. The suckers were laser cut out of 2mm MDF. I made 5 sizes of sucker from top to bottom and glued them on using the liquid latex. 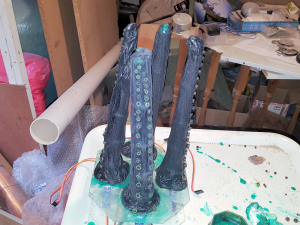 Here is the full set of four covered and ready. More stockings and liquid latex was

used to give the base some texture and hide the acrylic base.

In the base is an I2C 8 port PWM controller and a raspberry PI. 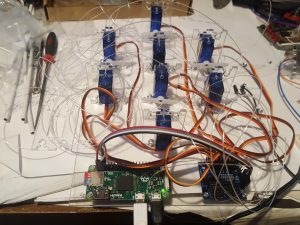 The pi is set to give X&Y sign waves to each tenticale to make them look like they are naturally waving. 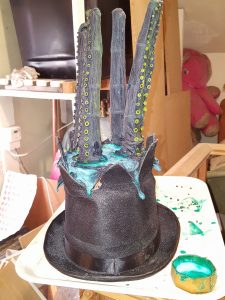 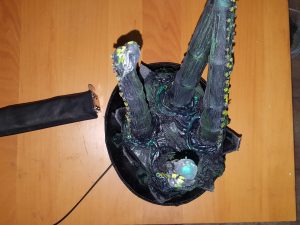 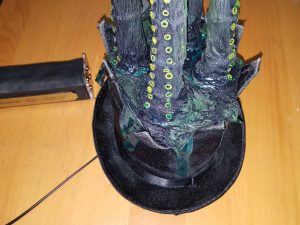 Drips of green liquid latex were added in each hat cut to simulate slime dripping down the hat. 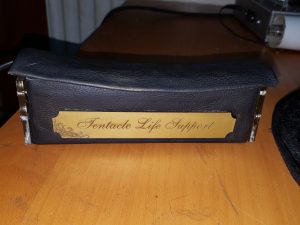 I was hoping to power the hat from a 5V USB lithium battery pack, but when it was all put together the current exceeded the 500mA allowed from the packs. So I had to improvise a 12V supply, which feeds a 1A 5V regulator in the hat. The SLA battery is wrapped with a piece of leather and and a engraved and painted Acrylic label.