So I had a better idea… and as far as I know there is no restrictions on entering twice.

This time, I needed some thing more impressive. I’d been tinkering with a demonstration of lighting a bulb with a single connection for a while, so I tied it in with that. Unfortunately the only (working) tesla coil that I have that has enough power (actually RMS current at the topload) is the Aetheriser. So that is the coil I had to use.

A quick test with a long filament lamp proved the idea workable, but the free connection got a bit warm (e.g. too hot to touch) so I added a brass ball protection to the free end 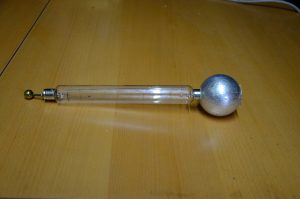 The large ball on the other end gives stability and stops the lamp from falling over.

The stills from the video.

and the last one of the failed cap end.. 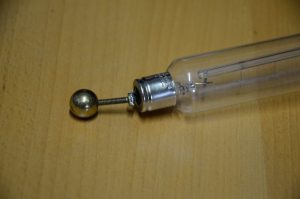 My other entry to Flashing Light Challenge 2017

Details for the entry for the 2017 flashing light prize.

The Flashing Light Prize  is an informal & fun contest to find the most unusual way of flashing an incandescent light bulb.

So, being me, it had to include high voltage, and It had to use what I had lying around as I’ve been quite short of time recently.

My Wimshurst came to mind, but I wasn’t sure the two laden jars would hold enough energy to light a lamp. A quick test proved that as long as I was using small lamps, there was plenty of power available.

My initial tests failed, as the leads from the bulb made a point source that leaked charge away from the Wimshurst, so it never charged up to enough voltage. This was an easy fix, I attached a 1/2″ brass ball onto the bulb leads, with a 12mm Gap I go a flash rate of ~1Hz and ~40,000V, plenty for a 6v bulb 🙂 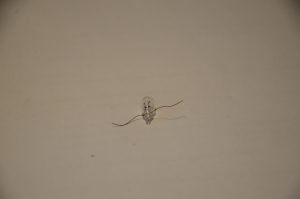 I had a few 6V 30ma Grain of wheat bulbs and these flashed really well from the sparks from the Wimshurst. The problem was after about 4 flashes that only just lit the bulb the filament would explode and leave a small arc lamp behind.

My thought was that the thermal shock from having 40,000V dumped into the filaments (rather than 6v) was probably something to do with the failure. I started to look around for a large HV inductance that would limit the inrush.

An Ignition coil secondary was put in series with the bulb and then I had a second thought, use it as a transformer to power the bulb at lower voltages. 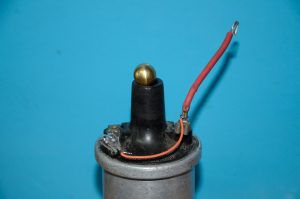 So two bulbs were connected across the Ignition coil primary and the secondary was put via a spark gap across the Wimshurst terminals.  This flashed really reliably.  Power and speed could be varied with the spark gap, although at full separation the bulbs looked excessively bright so the rate was kept quite small.
2017 flashing light entry video 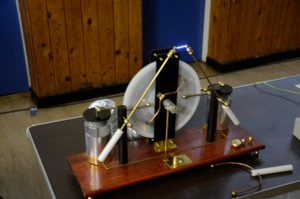 Incredibly, I won with this entry … So Chuffed !

Can’t wait until September to defend the title …