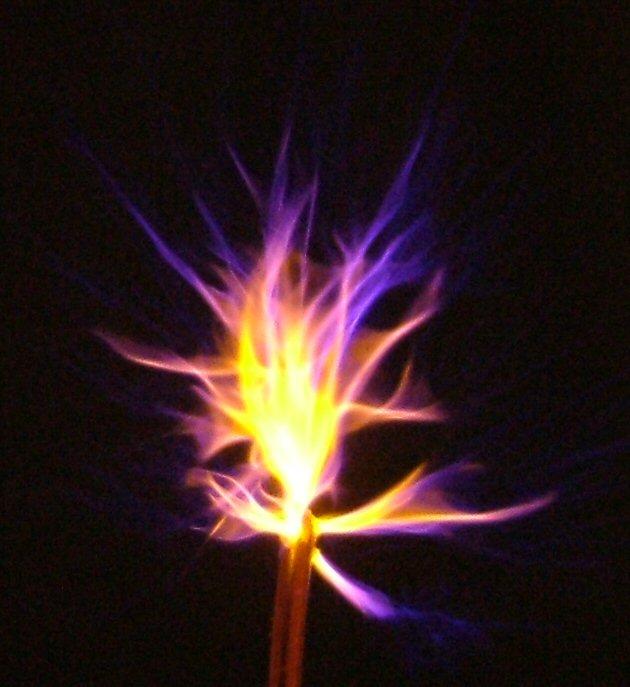 A page dedicated to trying to get different colours from a Tesla coil arc
Usually a tesla coil will give purpley-blue arca to air, due to the nitrogen in the atmosphere
But, if you load the breakout point with salt, Yellow arcs can be made.

This was my first attempt, these were created by dipping a wire breakout with salt and running the coil. the arcs on this page ar only about 5cm tall, as the salty effect won't affect bigger arcs.

These are a second attempt using a small peice of wood soaked with salty water.

This time I could get much bigger sparks (15" or so) and the sodium vapour affected a much larger area of the arc.

As Im using an SSTC for these arcs, a backup breakout was used. This will only draw arcs when the wood dries out and is no longer conductive. I did of course find this out thehard way, as two mosfets were sacrificed to the cause..

After trying various salt solutions on a breakout, I was sent some more interesting "samples" to try.

I used  a nail punch as the breakout, the sample was put into the indentation at the end, and my SSTC2 was run. wherever possible the conditions were kept the same for each sample.

Be carefull if you try to repeat this experement as some of the chemicals are quite dnagerous.

Playing with the Strontium Nitrate again, This time with a wooden breakout soaked in a saturated solution .

And with a mixture of Table Salt and Strontium Nitrate
The different shades of orange are down to the varying levels of each chemical on the breakout.