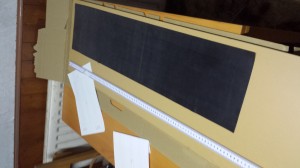 The VDG belt is made from a piece of pure latex. The piece that I bought was 1M square. The roller to roller centre to centre distance was 700mm so I would need a couple of joints. I decided to make the belt 720mm (1440mm around) long, even though the full length of the un-streached belt would be 730mm, This would allow for some tension in the belt when mounted on the two rollers. The belt was cut to 200mm wide using a rotary cutter and a 1m rule. Both halves of the belt were cut at once to ensure the dimensions were as similar as possible. 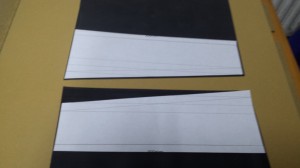 The joints were cut at an angle to reduce the “clonk” as each joint goes over the roller. Two templates were printed of the correct width and angle. 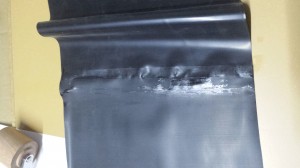 The first join. After cutting the two edges I used a credit card to “scrape” a thin layer of glue on both parts to be joined. A wooden roller was used to smooth out the joint and remove any air pockets from the join. This one showed a few wrinkles, I suspect from too much glue. You must use a good quality latex glue as the bond needs to be as small as possible and strong. 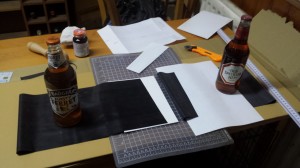 The second joint was aligned and cut on top of the first to ensure alignment. The two edges were rolled back and carefully weighted to stop them moving during the new joint. Paper was used to stop the glue from spreading on to the rest of the sheet. 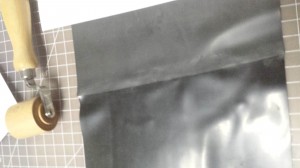 This joint went much better, creating a nice square belt for the VDG. 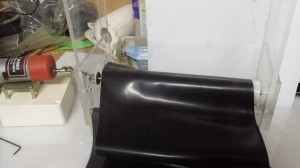 The belt was then threaded into the VDG by removing the rollers. 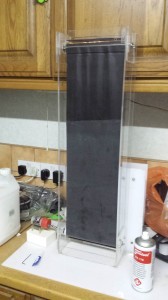 The completed belt on both rollers and stretched a little. All that remains to be done is to square up the two rollers so that when powered the belt will stay in the centre. The champher on both rollers should help with this. 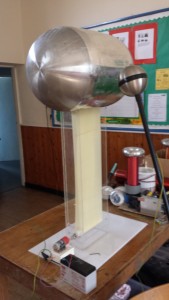 So after some playing, I found that the belt stuck together under load. Even with the rollers at their tightest it still happened. so I went up to 0.5mm Latex. 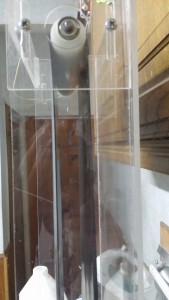 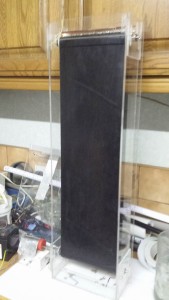 But even with 0.5mm Latex I still suffered the same issue.

so I sourced a piece of 1mm rubber sheet. Annoyingly, the cheapest of the lot.

I found that the latex cement that I was using didn’t work with this sheeting, so the joints were done with superglue. It does however leave quite a thick join.

But problem solved, even at full speed.