The cutter runs fine, but cutting anything away from top left was getting more and more of an issue. One of the biggest problems was the lack of air flow at the other corner (bottom right). This was visible as smoke not being extracted. The smoke from cutting at this end also reduces the available laser light by bing in the unfocussed laser beam meaning that you get incomplete cuts. The other issue is the smoke condenses on the optics, making the cutting worse.

Although adding an air assist would help (I may still do this) the cutting it doesn’t solve the other problems.

The real issue here is the asthmatic extraction fan in the unit. The fan wasn’t designed for laser extraction use, it is a repurposed and not very good, bathroom air ventilation fan. 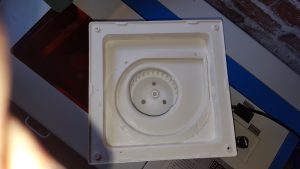 Luckily, I was at an amateur radio sale and found a 6″ mains cooling fan for £1, for that money its got to be worth a go. 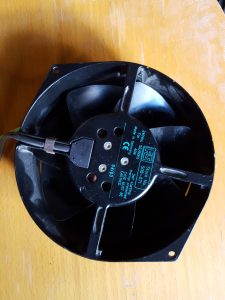 i needed to make an enclosure that would take the  fan, fit it to the cutter and to the existing 100mm pipe. Looking at the existing fan I decided to just add in the new one to the large flange and make a new plate to fit to the laser.

Taking off the old fan and the inner plate it looked an easy task, just replace this plate with a new one with the new fan.

So I cut and measured the laser, the fan and the old extractor, found a peice if 6mm acrylic and drilled mounting holes, all I needed to do was to cut two 140mm holes in the two peices of acrylic. Easy I have a Laser cutter…. So I reassembled the laser cutter and cut the circular holes in the mounting peices and then re-disassembled it. 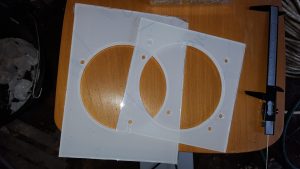 I then mounted the fan on to the old fan. 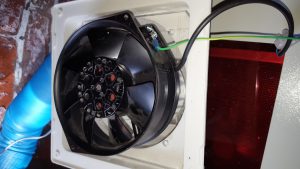 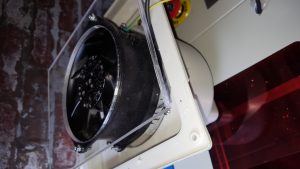 Slotted it in to place

A quick clean of all of the optics and tried some test peices.

A huge improvement – no smoke to be seen at all.