An amazing day, all my coils and static machines worked from beginning to end with no issues. The VDG performed well after a hail storm had knocked out all of the moisture from the air. It made a huge difference. I did however have a failure the night before the Gaussfest (therefore it cant count as a failure AT the Gaussfest) where I shared the earth from my VDG with the PiZero coils. A strong discharge killed the i2c on my Pi Zero. A swap of PiZeros, a number of downloads and a recompile got me back working in a hour or so. Glad I’d gone with the PIZero saved me £21 over a full Pi Failure.

Roger was new to the Gaussfest and brought his commercial VDG, a very nice unit with LOADS of accessories. It ran fairly well during the day after he replaced the original 15year old+ belt. I suspect he suffered with the damp as well, but it didn’t affect his VDG as much as mine, I put this down to a lack leakage from his very smooth top terminal. (The VDG’s not his).

Steve brought a couple of coils and a VDG (sorry no photo) . His desktop Static gap coil was a good solid performer, but his VTTC was just a work of art. It performed well with those lovely straight arcs characteristic of VTTC’s. He vows to return to Cambridge, can’t wait.

Jason’s coil ran very well, until he had a capacitor failure, which was a great shame, but hopefully easy to rectify.

Dave’s coil ran well as usual. Superb looking and a very reliable performer. I know Dave has plans for an upgrade, so look forward to the MkII

Phil and Phils coils (now share so many parts I can’t tell them apart, I’m not sure their owners can either). Both coils ran very well giving 8-10′ arcs to the floor,ceiling and occasionally to a target earth. PhilS did have a problem with a stray topload cable that caused a secondary strike 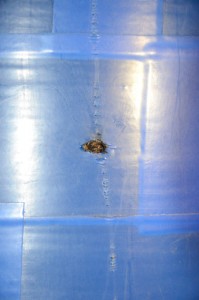 It didn’t appear to have done much damage, but only a strip down will tell.

Thanks to everyone that came and especially those who brought “stuff” to demonstrate. After talking to a couple of non-UK visitors they are very envious of our Teslathons, there are very few across the world, and the UK has two!

See you all at the next Gaussfest or at Cambridge.

Other Photos / links from the event.