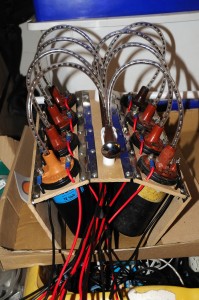 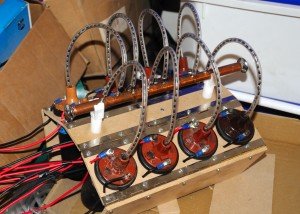 A 30 Kv power supply using 8 car ignition coils. The output of the coils are rectified with strings of 40 x 1n4007 diodes.
Each ignition coil, run flat out, draws around 5A at 12V so in theory the output should be around 300-350W drawing around 40A from the 12V supply.

The advantage of this drive is that there is no mains to back any fault, so it does make using the supply (slightly) safer than a mains powered unit. 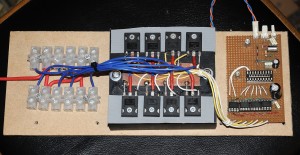 The ECU (Engine Control Unit)
The heart of the power supply is the ECU. The ECU gives some control of the output power of the system. The power is controlled by a variable resistor which controls the average power to the coils.

By arranging that no coils fire at exactly the same time as any of the others, the peak current draw from the batteries is limited, this allows smaller batteries to be used at lower powers. It also smooths the output so a smaller HV smoothing capacitor may be used. It effectively gives an 8 phase rectified HV supply.

To implement this there is a PIC18f14K50 controlling the timings of the 8 coils and taking control from a variable resistor. The PIC ensures that the on time of each coil is set to a maximum value ( 2.5mS for now can be as high as 3.5mS) so the coil will not be run into total saturation. It also spreads the pulses out over the 8 coils to prevent multiple coils turning on at the same time (except approaching full power where this is unavoidable.)

We have POWER!!! First test at full voltage 24v (2 x 12v SLA) into a jacobs ladder. Added 0.1uF caps across each of the coils to limit voltage rise when turned off. This is a much bigger problem at 24V than 12V. No clues at actual power. Well over 10A. My meter only goes up to 10A, and the fuse blows at 12A, I need a larger ammeter, and a new fuse. Continued in Strand on Tesla Coil 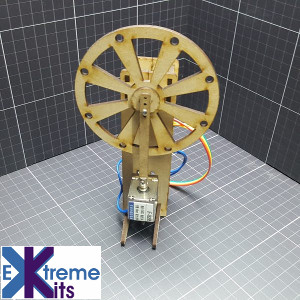